So who was Nikola Tesla and why have you never heard of him?

Nikola Tesla was born July 10, 1856, in the region we now know as Croatia.
The life of Tesla, his inventions and patents would be a great science study for your children to investigate. He was a famous scientist who later became rather obscure.

He was a brilliant electrical inventor and a visionary thinker who was far ahead of his time. He moved to the United States and worked with and for Thomas Edison and John Westinghouse. Tesla’s great dream was to find the means to broadcast electrical power without wires in between…can you say “wifi.”

Hundreds and Hundreds of Inventions

Many of his inventions are now part of our everyday lives: 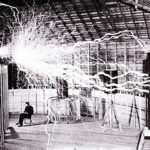 …and hundreds of other inventions.

He was known as a true eccentric to the point of being ridiculed by some of his contemporaries, but was so far ahead of  his time that many of his ideas are only now being recognized. When he died, most of Tesla’s technical papers mysteriously disappeared, and many have never been found.

To learn more about this brilliant scientist and the life he lived:

You can sign up for our Educating Today Newsletter to learn more about creative research and study skills plus get your free report on ways to build an entrepreneurial family.

Enter your name and primary email address  to instantly get your FREE Resource Guide and newsletter.

Your information is private and will never be shared with anyone. I respect your privacy and hate SPAM with a passion.

Educating Today offers encouragement and help to parents who want to give their children the Love of Learning and the joy of creating their own products...e-books, podcasts, print books, articles, etc. I've taught public and private school and I'm a “veteran homeschool mom.” My husband, Ron, and I homeschooled our two sons from birth through graduation and helped launch them into adulthood and business. We love to visit and encourage other parents to raise their kids to be producers and not just consumers. Enter your name and email in the box above so we can keep in touch.